A hundred years ago, grain was ground into flour using two large stones, called millstones. Since then, the science of milling grain into flour has changed dramatically.

Improved equipment, better transportation, and computerization have increased milling capacity, allowing mills to expand their production. Four newly constructed mills in Egypt are a prime example. In an effort to cut costs and produce a higher grade flour, developers have built new, modern mills in the same buildings where giant millstones used to stand. 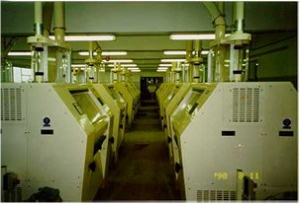 A Danish company designed and built four new mills in Egypt with Automatic Syd A/S as the sub-supplier of the electrical system.

In two locations, the mills were actually converted from old stone mills into modern milling plants. In the other two locations, there were turnkey projects, rehabilitating old roller mills. The company installed a total of 34 of the new mills in 3 of the locations.

The new setup not only incorporates the very latest technology, such as fully electronic feeder units and a toothed belt differential drive, but is also simple and user-friendly. In the fourth mill, the company installed a short milling system based on their own developed disc mill. This new solution allows the mill to produce nearly twice as much flour per day, in a substantially reduced area, compared to a conventional roller mill.

Automatic Syd specializes in the design and manufacturing of electrical switchboards and control panels, and the development of customized PLC and PC software. It was their job to supply a centralized control station that would allow one miller to monitor the entire plant. The company and Automatic Syd faced a choice: They could install their own version of a proprietary system, running closed applications, or they could opt for an open communication platform.

Previously, proprietary systems were the norm. But companies soon found that these closed systems were, in the long run, user-unfriendly, making the process of integrating new processes and equipment difficult, expensive, and time-consuming, and requiring diversified skills and tools. Today, these closed systems are slowly being replaced by open communication platforms.

The Modbus® protocol is one of these open applications. It has become so popular that in many instances it is accepted as the de facto industry standard. This was the application chosen for the mills. Allen-Bradley® PLC-5® processors were connected to the mill equipment. However, the A-B processors are not inherently Modbus-compatible. Therefore, a Modbus interface was needed.

Automatic Syd contacted Rockwell Automation-Denmark for a possible solution. They recommended ProSoft Technology's Modbus communication module. This module acts as a Modbus interface, providing highly configurable Modbus Master and Slave capabilities to A-B platforms. "Quite simply, the ProSoft Modbus communication interface makes it possible for Allen-Bradley platforms to communicate with a multitude of industrial devices," Doug Sharratt, founder of ProSoft, said at the time of this application. "Because of our partnership with Rockwell Automation®, our Modbus module is designed to fit in the A-B rack, allowing all data exchange to occur over the backplane."

The A-B PLC, with the ProSoft module installed in the rack, collects the data and displays it on the miller's PC using RSView®.

"With the ProSoft module, one miller can easily monitor the entire plant and, in case of emergencies, temporarily take over control until another miller has reached the specific machine to solve the problem,” said an Automatic Syd representative. “This is a cost-effective savings, since it takes fewer personnel and you get a lot of information such as alarms, stock levels, motor loads, etc. from the plant."

ProSoft’s Regional Sales Director noted: “Many industrial devices available today have implemented communications using the Modbus protocol. With our communication interfaces, users in a variety of industries are able to gather a great deal of data that can enhance the understanding of the process or, as in the case of these flour mills, allow the system to be controlled more efficiently."

Accomplishing the task of building modern flour mills where millstones used to stand is a complex undertaking. It takes the combined efforts of a number of companies, all working together in their area of expertise.

Automatic Syd A/S was part of that equation, and was sub-contracted to supply the electrical needs for the four mills. One of Automatic Syd's tasks required that all of the roller mills (in some cases for as many as 30 roller mills) in each plant be connected to a centralized control panel.

"Every mill has a keypad, where the miller can take over the control of the mill in emergencies," said a representative of Automatic Syd. "But some of the mills have 30 roller mills, and without centralized control, it is impossible to monitor all roller mills."

In order to incorporate the most modern equipment and processes available, the companies chose Allen-Bradley hardware because of its nationally recognized name brand and the availability of future product support. The Modbus protocol was chosen because of its “open” communication, making future expansion and change easy and cost-effective.

Integrating multiple applications was exactly what was needed for the Egytian flour mills, since the specifications called for the Modbus protocol. That was where ProSoft Technology stepped in.

"What we do may seem like a small part of the big picture," said ProSoft’s Regional Sales Director. "But the fact is, our interface modules allow companies like Allen-Bradley and Automatic Syd use the equipment they feel is best suited for the situation without having to worry about specific protocols. If we don't have an application interface that will work for a particular client, we're willing to seriously look at developing one. We view ourselves as a ‘market-driven company.’ ”