A leading manufacturer of aluminum cable products operates a production line with four cable presses at a site in Australia. However, to increase capacity, the finishing stations and warehousing areas had to be restructured.

The peak performances of the presses were to be better buffered and the supply and output from the press lines and the warehousing areas was to become more efficient. It was also essential to achieve consistent loading of the workstations and optimized handling of baskets and bulk packaging.

All this mandated a powerful logistic base to transport the profile baskets and profile packs. In addition, the complete material transport of a wide variety of packing - in other words, handling of baskets and bulk packaging, which was formerly done conventionally with forklifts - is achieved with a system consisting of two automatic cranes.

The aluminum company decided on this solution not only to improve its ability to buffer the peak performances of the presses, but also to achieve a degree of redundancy that would provide better security against failure. Both the cranes needed to be able to operate over a distance of approximately 220 meters at two levels and carry out completely independent transport movements over the full length of the system. Two levels are essential because both cranes have to be driven independently over the full distance, and also have to perform lifting and turning movements. 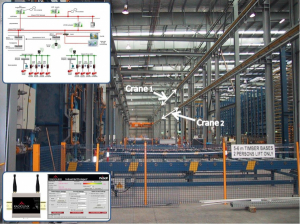 It was important to the company to entrust the solution to this problem to experienced suppliers. Vollert was accordingly appointed prime contractor. Aberle Automation, for many years a supplier of control systems and a partner for Vollert, the system builder, was entrusted with the complete control system.

Both companies have considerable experience in the logistics and intra-logistics field, and this project was not by any means unexplored territory for either of them. However, using wireless communication to solve the problem was new to them. In the former systems, photo data sensors had been installed, and these could now no longer be used over a distance of 220 meters.

Aberle worked out, based on its established knowledge of material handling and turnkey logistic systems, a sophisticated automation solution. This was achieved in close collaboration with NemaSystems, a renowned Rockwell Automation® solution provider. NemaSystems delivered all Rockwell Automation and ProSoft Technology products, and was also jointly responsible for choosing the right control concept. The Württemberg-based company provided consultancy and support in selecting and configuring the control system components, and was also available as support and backup during the commissioning.

The automation solution could not have been completed without the active contribution by Rockwell Automation, as the manufacturer of a suitable control platform, and by ProSoft Technology, as the supplier of the necessary wireless products and on-site support in Australia. The core element of the solution is a Rockwell Automation ControlLogix® system with EtherNet/IP™ as the control network. A principal reason for choosing the Logix control platform was that the end user was already using Logix control systems from Rockwell Automation. Aberle had also already developed a software standard for similar crane systems based on Logix, which facilitated a secure integration.

The challenge in the new project was now the coupling of the decentralized peripherals moving in parallel on the cranes. A line-of-sight radio path covering the entire movement route of approximately 220 meters for both cranes, moving independently of one another, was absolutely essential. A technical solution other than driving the peripherals in parallel was impossible, because the drives and the corresponding I/O modules had to sit directly on the crane. Given these restrictions, the decentralized I/O modules and motor-drives frequency converters were coupled over EtherNet/IP with Industrial Hotspots from ProSoft Technology. The end user was already using various wireless systems but, in the crane systems area, the aluminum manufacturer decided on standardization with ProSoft Technology modules. In the beginning, there were still communication faults while transporting the profile baskets and profile packs as a result of reflections and other wireless networks that were set up on the same channels. Nonetheless, this problem could be rectified by ProSoft Technology directly on site.

Certainly there are similar systems fitted with wireless Ethernet across the world, but the project was still a challenge: The high update rate required and communication security for controlling the drives and I/O modules by means of EtherNet/IP was not guaranteed to be without problems.

Using EtherNet/IP as a control network is undoubtedly also a feature of the automation solution, as is control of the I/O modules and drives over wireless LAN. This is how a comprehensive network was created, from the management level to decentralized I/O module and drive. The expenditure for installing this control network appeared relatively small, given the fact that the alternative offered was a considerably more complicated solution using leaky cable technology.

Of course, the correct antenna positioning and dimensioning demanded a certain amount of experience, but this was not, in the final analysis, one of the reasons for choosing ProSoft Technology. The ProSoft specialists ensured that the susceptibility to failure of the I/O modules and drives in this innovative crane system was no worse than in “normal,” cable-connected applications. Wireless transfer means that the crane modules and drives can be connected to the EtherNet/IP network, and accordingly the wiring and maintenance costs were minimized in comparison with conventional systems. WLAN transfer is reliable in operation, because communication monitoring is also intrinsic to the system. However, if faults should occur, then the system could be stopped immediately.

Savings arise compared with conventional systems, not only because of lower installation costs. Faster software design and IBN through the Ethernet network are also relevant cost factors. There is also simpler and better remote maintenance, carried out by Aberle over a VPN connection. This connection allows, as a result of the use of Ethernet as the control network, access to the drives and the decentralized I/O modules. The highly integrated control architecture is rounded off by viewing the system via a PanelView™ terminal with FactoryTalk® View for ME, which is also integrated with the Ethernet network. FT View's viewing gives a very good overview of the expanded system and provides the necessary tools to respond to any system faults in near-real time.